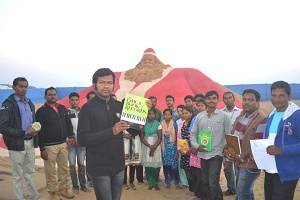 Mobile App and Facebook Page of the National Trust to mark the “National Trust Foundation Day” on the theme “Celebrating Inclusion” by the government.

In 1999 dec. 30th the National Trust Act for the welfare of persons with Autism, Cerebral Palsy, Mental Retardation and Multiple Disabilities was passed in the Parliament.

The National Trust is a Statutory Body under Department of Empowerment of Persons with Disabilities and Ministry of Social Justice & Empowerment.

The National Trust is implementing 10 schemes for overall development of persons with disabilities which have been revised and launched.

This year will have an extra leap second added to the end of it, making it slightly longer than 2015.

Why is it added?

The Earth’s rotation around its own axis is not regular, as sometimes it speeds up and sometimes it slows down, due to various factors including the moon’s gravitational Earth-braking forces.

As a result, Astronomical Time (UT1) gradually falls out of synch with Atomic time (UTC), and as and when the difference between UTC and UT1 approaches 0.9 seconds, a “Leap Second” is added to UTC through Atomic clocks worldwide.

Since 1972, 36 “Leap Seconds” have been added at intervals varying from six months to seven years.

37th “Leap Second” will be added to UTC at the midnight of December 31, 2016 in the countries within this time zone.

Topic : India and its Neighbour countries

India is ready to Supply Additional 80 MW to Nepal from January 2017. With this, the total supply of electricity to Nepal from India will be about 400 MW.

The power will be supplied to Nepal through the Muzaffarpur (India) – Dhalkebar (Nepal) transmission line.

Sand artist Sudharsan pattnaik’s Santa claus sculpture has got place in the Limca book of Records, which is the world’s largest sand sculpture.

He was born in puri, Odisha and he started sculpting images on sand since the age of seven and has designed hundreds of sand arts.

Subscribe our Newsletter to get Daily Tnpsc current affairs dec in English and Tamil on your Inbox.