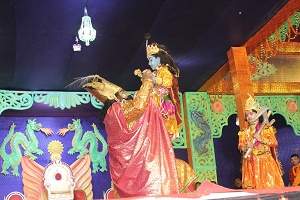 Shankar Balasubramanian, an indian – origin british and DNA expert at Cambridge University, has received a Knighthood by Queen Elizabeth II for their contributions.

Mr. Balasubramanian Professor of Medical Chemistry at Cambridge University, has been recognized for his work as a co inventor of Next Generation DNA sequencing, described as the most transformational advance in biology and medicine for decades.

The journey of Mariyappan Thangavelu, the Indian Paralympic high jumper who won gold medal at the 2016 Paralympic Games will now be made into a movie by Aiswarya Dhanush.

Aiswaryaa released a book named “Standing on an apple”, which is her memoirs.

In order to pray to the deity to give good health, rains, and harvest, all Toda men from 14 clans joined together to celebrate the annual festival called as “Modhweth”.

In this festival includes dancing, singing and Toda youth lifting a greased boulder weighing around 80 kg, to showcase their strength, balance and masculinity.

Two new Hindi writers Shraddha and Ghyansham Kumar Devansh have been selected for Bharatiya Jnanpith Navlekhan Award for the year 2016.

ISRO’s rocket PSLV – C37 will launch record 83 tiny satellites in one mission. Of these Satellites, only three belongs to India and 80 belongs to Israel, Netherlands, Switzerland Kazakhstan and US.

In June 2016, ISRO had set a record by successfully launching 20 satellites in a single mission.

11-day gala festival Dhanua Jatra is begin on 2nd jan 2017 in Bargarh municipality in Odisha. It is considered to be the world’s largest open air theatrical festival.

The plays start with the dethroning of emperor Ugrasena by the angry prince Kansa, over the marriage of his sister Devaki with Basudeva.

It ends with death of Kansa, and Ugrasena restoring back to become the king. During this festival Kansa can punish people with penalty for their mistakes.

Subscribe our Newsletter to get Daily TNPSC Current Affairs jan in English and Tamil on your Inbox.