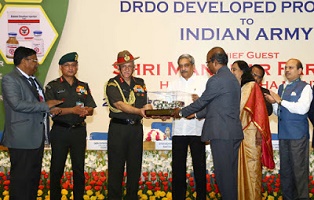 Kurukh, an Endangered tribal language of the Dravidian family, is set to get a new life in West Bengal.

It is spoken by the Oraon tribal community. The language was given official status in the State last month. Jharkhand has recognised Kurukh as a language.

Kurukh a member of the North Dravidian subfamily of Dravidian languages, spoken by some 1.8 million people of the Oraon tribes of the Chota Nagpur plateau of east-central India.

The language is marked as being in a “vulnerable” state in UNESCO’s list of endangered languages.

The World Wildlife Day (WWD) was observed across the world on 3 March 2017 with the theme “Listen to the Young Voices”.

To celebrate the many beautiful and varied forms of wild fauna and flora, World Wildlife day is observed.

It is also an opportunity for them to engage with one another and together forge and inspired path to a better world.

DRDO Hands Over its Products to Indian Army

Defence Research and Development Organisation (DRDO) submitted three of its products for induction into the Indian Army.

Weapon Locating Radar (WLR), SWATHI, provides fast, automatic and accurate location of all enemy weapons like mortars, shells and rockets firing within in its effective zone of coverage.

The NBC Recce Vehicle Mk-I, for carrying out shortening of Nuclear, Biological and Chemical Contaminated areas.

It is used for collecting solid and liquid samples of biologically contaminated areas, mark the nuclear and chemical contamination zone and transfer the collected data speedily to support formations.

DRDO developed the formulations for use antidotes and de-corporating agents for Chemical, Biological, Radiological and Nuclear (CBRN) emergencies.