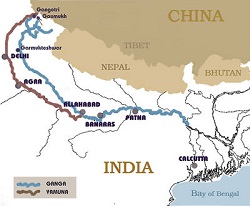 International Diamond Conference “Mines to Market 2017” was held in India.

The conference was held with an objective of bringing together the leading Miners, Diamantaires, Retailers, Bankers and Analysts from across the globe on a platform to discuss the supply and demand issues faced by the Global Diamond Industry.

The conference witnessed Ministers from mining countries, delegates from Mining Companies, heads of Retail and Luxury brands, Int. Diamond heads of various banks and other prominent personalities of the Diamond industry.

India is the largest cut and polished diamond manufacturer in the world. 93 % of its production is exported.

In a first in the country, the Uttarakhand High Court has declared that the rivers Ganga and Yamuna were “living persons”.

On March 15, New Zealand River Whanganui became the first in the world to be granted a legal human status.

The Ganga and Yamuna, all their tributaries, streams are declared as legal persons or living entities having the status of a legal person with all corresponding rights, duties and liabilities of a living person.

In order to preserve and conserve river Ganga and Yamuna, these rivers are declared as “Living Persons”.

Recognizing the rivers as a living entity grants them new found legal identity and all rights laid out in the Constitution of India.

What necessitated this move?

Both the rivers have been in a state of neglect and even though several government initiatives, including the Centre’s Namami Gange programme, are aimed at restoring their health, not much has been achieved yet.

Over 1500 million litres of raw sewage is discharged into the Ganga every day.

This joins 500 million litres of industrial waste dumped by more than 700 highly polluting industries located along it.

The court ordered that the Director of the Namami Gange programme, the Uttarakhand Chief Secretary, and the Advocate-General of Uttarakhand would serve as “parents” for the rivers.

And would be the human faces to “protect, conserve and preserve” the rivers and their tributaries.

In Cricket, Tamil Nadu has won the domestic 50-over competition, the Vijay Hazare Trophy, for the fifth time.

In the Final played at the Feroz Shah Kotla Stadium in Delhi, they defeated Bengal by 37 runs.

Subscribe our Newsletter to get Daily Tnpsc current Affairs Marin English and Tamil on your Inbox.