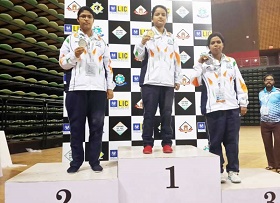 India has signed a civilian nuclear deal with Japan during the annual bilateral summit in Tokyo.

India is the first non-member of the non-proliferation treaty (NPT) to have signed such a deal with Japan.

The deal is significant as it will help guarantee Japan’s continued support to India’s civil nuclear programme.

The deal will bring Japan into the Indian nuclear market where France and Russia have already have a strong presence.

Significance of this agreement :

The completion of the nuclear deal comes as the NSG is meeting in Vienna to discuss, among other issues, if non-NPT (nuclear non-proliferation Treaty) countries like India can enter this exclusive grouping.

In Birmingham, during the seventh World Carrom Championship event our Indian Women’s Team wins the Gold medal by defeating the Sri Lanka.

Meanwhile, the men’s team lost to Sri Lanka to win the silver medal in the competition.

For more Current Affairs in English and Tamil visit : www.tnpsc.academy/current-affairs