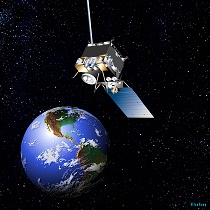 Archaeologists have unearthed 1000-year-old ancient building ruins believed to be dating back to the Jin and Yuan dynasties in China’s northern Hebei province.

A 6-meter-wide main road, flanked on both sides by the ruins of buildings is also unearthed on this site.

Islamic window in conventional banks for introduction of Sharia-compliant or interest-free banking in the country was proposed by the Reserve Bank of India (RBI).

What is Islamic banking?

Islamic or Sharia banking is a finance system based on the principles of not charging interest. The charging of interest is prohibited under Islam.

Introduction of full-fledged Islamic banking with profit-loss sharing complex products may be considered at a later stage based on experience gained in course of time.

NASA has successfully launched for the National Oceanic and Atmospheric Administration (NOAA) the first in a series of highly advanced geostationary weather satellites.

The satellite is known as Geostationary Operational Environmental Satellite-R (GOES-R) which is renamed as GOES-16 after it reaches its final designated orbit in the next two weeks.

GOES-R will strengthen NOAA’s ability to issue life-saving forecasts and warnings and it is aimed at make the United States an even stronger, more resilient weather-ready nation.

Forecasters will use the lightning mapper to hone in on storms that represent the greatest threats.

Beyond weather forecasting, GOES-R also will be part of the Search and Rescue Satellite Aided Tracking (SARSAT) System, an international satellite-based search and rescue network operated by NOAA.

Spiritual leader Sri Sri Ravi Shankar was honoured with an international peace prize for his efforts in ensuring world peace.

Subscribe our Newsletter to get Daily November TNPSC Current Affairs in Tamil and English on your Inbox.