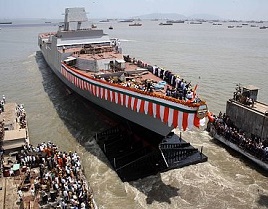 A Guided Missile Destroyer INS Chennai, has been commissioned into the Indian Navy.

INS Chennai will be placed under the administrative control of the Flag Officer Commanding-in-Chief, Western Naval Command.

The ship will be worked in the Western Fleet and ported at Mumbai.

The ship is fitted with a modern Surveillance Radar which provides target data to the gunnery weapon systems of the ship.

A unique feature of this ship is the high level of indigenisation incorporated in the production.

Two Prithvi-II missiles were successfully test-fired from the launch complex-III of the Integrated Test Range near Balasore in Odisha.

From a road-mobile launcher, the Strategic Forces Command (SFC) fired the missiles.

Prithvi-II is a short-range surface-to-surface missile.

Prithvi-II has been designed to operate with both liquid and solid fuels.

It is capable of carrying both conventional and nuclear payloads.

The objective of the tool is to detect and mitigate potential risks of market manipulation and rumours, and to reduce information asymmetry arising from it on digital media platforms.

It would provide accurate information involving listed companies and the BSE through the exchange website for the benefit of investors.