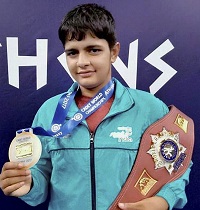 Two mountain ranges on Pluto have been named after Tenzing Norgay and Edmund Hillary respectively by the International Astronomical Union.

These are the first geological features on the planet to be named following the close flyby by the New Horizons spacecraft in July 2015.

Who are Tenzing Montes and Hillary Montes?

These two were the first to reach the summit of Mount Everest and return safely.

The International Astronomical Union (IAU) was founded in 1919.

Its mission is to promote and safeguard the science of astronomy in all its aspects through international cooperation.

A new project named “Sahara Forest Project” has been launched in Jordan.

It will use solar panels to provide power and include outdoor planting space, two saltwater-cooled greenhouses, a water desalination unit and salt ponds for salt production.

The Sahara Forest Project demonstrates that innovative application of technology has the potential to revolutionize our land systems in a way that benefits the climate, people, and businesses.

Among other Indians in the fray, Neelam settled for bronze in the 43kg category.