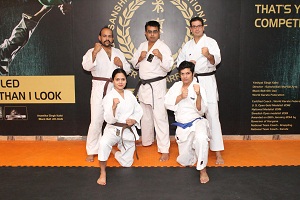 India also won a gold medal in the team event.

The other Indian team were Abhishek Sengupta, Rantej Singh, Harcharan Singh Chowhan and Shaifali Agarwal were trained under Sensei Kalsi.

Haryana Government announced that Ballabhgarh would be renamed as Balramgarh.

And also announced a number of projects for the development of Ballabhgarh and NIT Faridabad Assembly constituencies.

The government had earlier renamed Gurgaon as Gurugram and Mewat as Nuh.

Srishti Kaur from India has been selected as Miss Teen Universe 2017, among 25 other contestants from around the world in the annual beauty pageant.

Samantha Pierre from Canada and Ary Trava from Mexico were the runners-up in this event.

Topic : India and its Neighbour countries

This new carrier aircraft will have a displacement of 50,000 tonnes, which means that this Type 001-A will be mid-sized carrieer.

This is significantly smaller than the super-carriers operated by the U.S. which are above 70,000 tonnes.

The WRM will provide an important platform for potential investors to partner and participate in the immmense opportunities that are made available in India.

In addition, it will also provide a platform for sharing cutting edge research, best practices and experiences from around the globe.