Article on Jallikattu for all TNPSC Exams 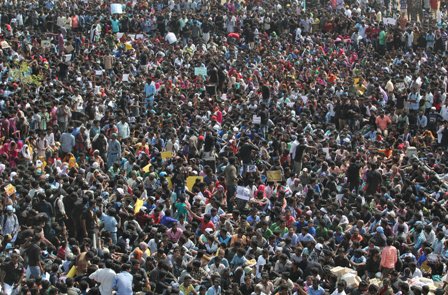 Jallikattu (or sallikkattu), also known as eruthazhuvuthal (“bull embracing”) and manjuvirattu (“bull chasing”) is a Traditional Sport of Tamil Nadu.

The term Sallikattu is derived from salli (coins) and kattu (package), which refers to a prize of coins that are tied to the bull’s horns.  Participants attempt to retrieve (take) the prize.

Sallikattu is typically practiced in the state of Tamil Nadu as a part of Pongal celebrations. The traditional attraction is the Bos indicus bull, commonly the Kangayam breed. Later in the colonial period, the name was changed to Jallikattu.

How is Jallikattu played?

When the bull is released into a crowd of people and multiple human participants attempt to grab the large hump of the bull with both arms and hang on to it while the bull attempts to escape. Participants hold the hump for as long as possible, attempting to bring the bull to a stop. In some cases, participants must ride long enough to remove flags on the bull’s horns.

Jallikattu has been practiced for thousands of years in Tamil Nadu.

An inscription on EruThuzuvudhal at Government Museum in Tamil Nadu. 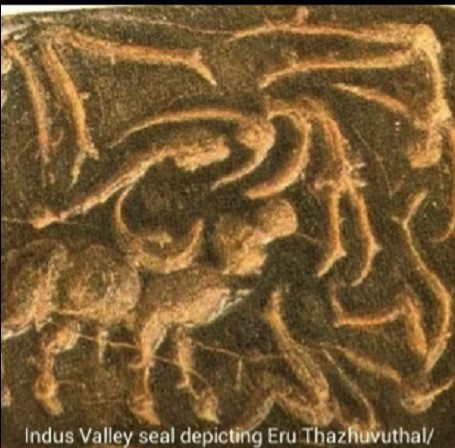 A well-preserved seal found at Mohenjo-Daro in the 1930s is available at the Delhi Museum, which shows the bull fighting was in practice during the Indus Valley Civilization.

Traditionally, Jallikattu was played to judge a man’s virility (boldness) it was seen as a way to win a woman’s hand in marriage.

Kalithogai, a classic Tamil poetic work of Sangam literature, speaks of how the bulls were women’s best friends, in that they selected the right partners for them.

Modern day Jallikattu is played by farming communities in Tamil Nadu to select the strongest bulls as studs for their cows to reproduce high quality calves.

Koyilkaalai (கோவில்காளை) are freely avail by the small farmers who cannot afford stud bulls for their cows.

Native or Indigenous breed is the breed which originating in and characteristic of particular country or region.Currently, We have five main breeds. They are

Cross breed is the process which produce an animal or plant by mating or hybridizing two different species, breeds or varieties. Cross breeding is also done in cats, dogs, cattles, sheeps, horses.

There is no need to spending money on special foods for their survival.

Since native breeds are originated in that region, they are mostly adopted to that area’s climate and weather conditions.

Having high immunity, which can resist them from affecting by diseases over cross breeds. Native breeds are healthier naturally.

Even though cross breeds are yielding high quantity milk than native breeds, their investment amount is higher than their outputs comparing with native breeds.

The native breeds in Tamil Nadu are facing threats to extinct due to,

In the five native breeds, three of them are already in the list of endangered species.

“The Pulikulam bulls are used in jallikattu. A ban on Jallikattu has posed a threat to the breed, but organic farming and vineyards in the Theni district have offered it a new lease of life,” as per researcher’s statements.

Tamil Nadu Veterinary and Animal Sciences University (TANUVAS) has found in research that, “The Alambadi breed is already facing the threat of extinction as its population is extremely small,”

As Jallikattu is played by farming communities to select the strongest bulls as studs for their cows, high quality calves of native breeds are reproduced so that they are saved from extinction.

Jallikattu was banned by Supreme Court in 2014 by stating that, it violates Prevention of Cruelty to Animals Act, 1960 (PCA Act).

What is Prevention of Cruelty to Animals Act, 1960?

The prevention of cruelty to Animals act is an act passed by the Central Government in  1960.

This Act is to prevent the infliction of unnecessary pain or suffering on animals.

Under this act, Animal Welfare Board of India (AWBI) was established to promote animal welfare generally and to protect animals from unnecessary sufferings or pain.

A separate section for restrictions on exhibition and training of PERFORMING ANIMALS was included in this act.

What is meant by Performing animals?

An animal which is used for exhibition and training for entertainment are called as Performing Animals.

How did Jallikattu ban come?

In 2012, The Madras High Court permitted the conduct of Jallikattu, even though Bull is a Performing Animal. It permitted to conduct Jallikattu in eight places in Madurai, Trichy and Sivaganga districts between January 15 and 29.

The Bench ordered that the events should be conducted strictly in compliance with a series of interim orders passed by the Supreme Court on the issue between January 2008 and March 2011, the safeguards provided under the Tamil Nadu Regulation of Jallikattu Act, 2009 and additional safety measures.

Jallikattu regulation Act – 2009 was introduced by the Tamil Nadu legislative in 2009 which asks to follow the rules in the preparation of event Jallikattu.

A written permission is obtained from the respective collector, thirty days prior to conduct of event along with notification of the event location.

The arena and the way through which the bulls pass through is double-barricaded, in order to avoid injuries to the spectators and by-standers who may be permitted to remain within the barricades.

The necessary gallery areas are built up along the double barricades.

The necessary permissions are obtained from the collector for the participants and the bulls fifteen days prior.

Final preparation before the event include a complete testing by the authorities of the Animal Husbandry Department, to ensure that performance enhancement drugs, liquor or other irritants are not used on the bulls.

After the Madras High Court Order, PETA has filed a case to ban Jallikattu in Supreme Court under the section to protect the performing animals (bull) which suffered from unnecessary pain in Jallikattu as per prevention of cruelty to Animals act (PCA Act) as they have done investigations in five places where Jallikattu held.

The Supreme Court banned Jallikattu in 2014, upholding concerns raised by activists stated that the Jallikattu amounted to cruelty to animal besides posing a threat to humans.

The Supreme Court stated, “use of bulls in such events severely harmed the animals and constituted an offence under the Prevention of Cruelty to the Animals Act.”

Consequently, bulls were banned from being used as “performing animals” either for jallikattu events or bullock-cart races in the States of Tamil Nadu, Maharashtra or elsewhere in country.

From that onwards, Jallikattu didn’t take place in Tamil Nadu for 3 consecutive years.

The 2017 Pro – Jallikattu protest is the protest against Supreme court’s order to ban Jallikattu.

The protest was done by various groups of youngsters & students in mass without specific leadership.

The Pro Jallikattu protest started in Alanganallur (Madurai district) and rapidly spread to all parts of Tamil Nadu with the help of social- media which lead to huge flow of youngsters and students. It gained mass support from all streams of people in Tamil Nadu.

The Pro Jallikattu protest was held in all over Tamil Nadu and also in some places across India and in foreign countries.

On Jan 23, 2017 the protest ended when the Tamil Nadu Government passed an ordiance to amend the PCA act to revoke ban on Jallikattu.

Amendment of PCA act by passing an ordinance:

The ordinance defines Jallikattu, and amends some sections of PCA Act to conduct Jallikattu.

It defines ‘Jallikattu’ as an event involving bulls conducted with a view to following tradition and culture between January and May every year in Tamil Nadu, and which includes ‘manju virattu’, ‘vadamadu’ and ‘eruthu vidum vizha’.

It amends Section 3 of PCA so that notwithstanding its provisions, Jallikattu may be held subject to rules and regulations.

It amends Section 11 to add ‘the conduct of Jallikattu’ as another exception to the list of actions that do not amount to cruelty.

It amends Section 22, which relates to restrictions on some animals being used for performances, to make this clause inapplicable to Jallikattu.

It adds Jallikattu as another item in a list of ‘exemptions’ from the rule against using some animals as performing animals. The original list contained use of animals by the police and military after training them and for use for scientific and educational purposes.

It adds Section 28A to say nothing in the Act would apply to Jallikattu.

2 responses on "Article on Jallikattu for all TNPSC Exams"