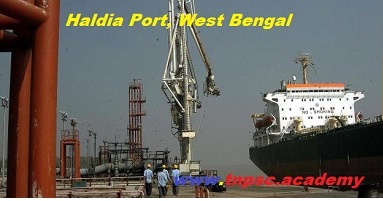 The Lok Sabha has passed the Human Immunodeficiency Virus (HIV) and Acquired Immune Deficiency Syndrome (AIDS) (Prevention and Control) Bill, 2017, which will strengthen the rights of the people infected with the disease.

Cases relating to HIV positive persons shall be disposed off by the court on a priority basis.

When passing any order with regard to a maintenance application filed by an HIV infected or affected person, the court shall take into account the medical expenses incurred by the applicant.

The Haldia port of West Bengal has declared as the cleanest in a country by the Ministry.

It is the first-ever ranking of all major Indian ports on sanitation parameters.

The ranking of all 13 Indian ports was conducted by the Quality Council of India (QCI).

The ranking was based on the efforts made by these ports to address waste generating sources with respect to port operation, office area, township area and the response to incoming ships.

The portal was launched by Union Minister for Science & Technology and Earth Sciences, Harsh Vardhan on the occasion of 250th anniversary of SOI.

It will offer free download of 3,000 Topographic maps or Open Series Maps (OSM) in a pdf format on 1:50,000 scale through Aaadhar enabled user authentication process.

SOI is the principal mapping agency of the country.

It comes under the Department of Science & Technology.

SOI has surveyed and mapped each and every part of the country and these maps have played valuable role in nation building.

Subscribe our Newsletter to get Daily TNPSC Current affairs Apr in English and Tamil on your Inbox.