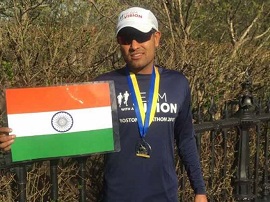 The UP government changed the name of Gorakhpur and Agra Airports.

And also the name of the department of welfare of the differently abled was changed.

The Gorakhpur Airforce Station has been renamed as Mahayogi Goraknath Airport after the founder of the Nath monastic movement.

The Agra Airport will be renamed after Pandit Deen Dayal Upadhyay airport.

The Department of Disabled Welfare will now be known as ‘Divyang Jan Vikas Empowerment’.

Sahitya Akademi announced the Translation Prize 2016 to English language to Sri Aniruddan Vasudevan for his book.

He was selected for his book “One part Woman” translation of Sri Perumal Murugan’s Tamil Novel “Maadhorubagan”.

The above translation prize winner along with the other winners in 23 languages will be presented at the special function to be held in june 2017.

Boston Marathon is the world’s oldest, most competitive and the hardest marathon to qualify for.