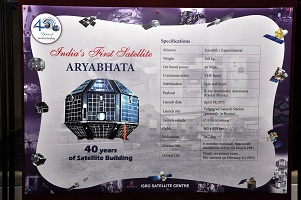 With a view to strengthening healthy democratic values in the country, the Central Government has decided to do away with beacons of all categories of vehicles in the country.

These amendments in this regard will be made in the Central Motor Vehicles Rules of 1989.

Its abolition would mean that neither the Centre nor the States would have any dignitary that governments can nominate for the usage of red beacons.

Beacons, however, will be allowed on vehicles concerned with emergency and relief services, ambulance, fire service etc.

India’s first satellite baby “Aryabhata” was launched successfully by a Russian rocket on 19th April 42 years ago in 1975.

Aryabhata is the first Indian spacecraft that was also built in the country.

It is named after the 5th century astronomer, the experimental spacecraft did not last its design life of six months in space.

It was meant to study distant celestial bodies that emit X-rays, Sun and Earth’s ionosphere.

Video gaming to be included in 2022 Asian Games

Competitive video games will become a medal sport for the first time ever at the 2022 Asian Games.

This game will perform as a demonstration event at the 2018 edition of the next Asian Games, to be held in Indonesia.

The official inclusion as a medal sport will be in the 2022 Asian Games in Hangzhou, China.

Mongol Sat-I was launched by the Mongolia.

Mongolia launched its first satellite, part of its efforts to make use of new technology to diversify its resource-dependent economy.

The satellite was launched in partnership with Asia Broadcast Satellite (ABS), a telecoms and broadcast provider for the region.

In addition to that, Meghalaya was chosen for commendation prize for total food grain production.

Tamil Nadu has been chosen for the prestigious award in large category (production more than 10 million tonnes).

The state produced 130 lakh tonnes of food grains in 2015-16,that is the highest in the last five years.

Krishi Karman awards were instituted in the year 2010-11 to reward the best performing States in food grains and individual crops of Rice, Wheat, Pulses and Coarse Cereals.

(Already some details were given in current affairs of Apr 14 —- https://www.tnpsc.academy/tnpsc-current-affairs-apr-14-2017/)