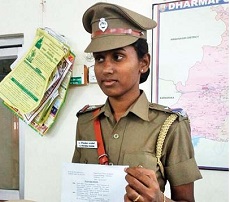 Topic : History – Persons in News, New Appointments, Who is who?

K Prithika Yashini, aged around 25 years, is the first transgender person to become a police official in India

In terms of judgement of the Madras High Court delivered on 6 November 2015, directions were given to the Tamil Nadu Uniformed Services Recruitment Board (TNUSRB) to appoint K Prithika Yashini as a sub-inspector of police as she is “entitled to get the job”.

The judgement further directed the TNUSRB to include transgender people as a “third category”, apart from the usual category of “male” and “female”.

Ration cards in Tamil Nadu are all replaced with Smart Card to transform fully digital India.

Consumers can continue to buy commodities at PDS outlets by using their existing ration cards till such time they received the smart cards.

Rashtriya Vayoshri Yojana was launched by the government.

It was launched in District Nellore, Andhra Pradesh.

Aim of the Scheme:

The Scheme aims at providing Senior Citizens, belonging to BPL category and suffering from any of the age related disability/infirmity with such assisted-living devices which can restore near normalcy in their bodily functions, overcoming the disability/infirmity manifested.

The proposal for formulation of a Scheme for providing Physical Aids and Assisted-Living Devices for Senior Citizens belonging to BPL Category was announced in the Budget 2015-16.

The comprehensive scheme has the following components:

Chenani-Nashri tunnel, a 10.9 km road tunnel which will shorten the driving time between Jammu and Srinagar by two hours, was inaugurated.

The two-lane Chenani-Nashri tunnel will be Asia’s longest, which will cut the distance between Jammu and Srinagar to around 250km from the current 350km.

Agreements between India and Malaysia:

Proposed development of a urea and ammonia manufacturing plant in Malaysia.

Cooperation in the field of sports through the exchange of sportspersons, etc.