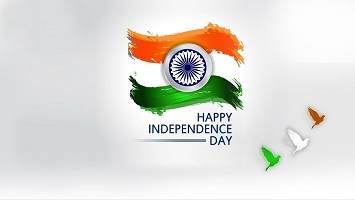 Independence Day is an annual observance celebrated every year on 15th of August.

At this day India got freedom from the British rule after long years of slavery.

It has been declared as the National and Gazetted Holiday all across the India in order to independently commemorate the independence of the country from British Empire on 15th of August in 1947.

In this game, overall India got third place with the total number of 7 medals including 2 gold, 1 silver and 4 bronze medals.

Sri Aurobindo’s rich thoughts and grand vision for India continue to be a great source of inspiration.

A spiritual reformer and philosopher, Sri Aurobindo had a major contribution in the Indian freedom struggle.

The largest volcanic region on Earth

Scientists have discovered the largest volcanic region on Earth – consisting of almost 100 volcanoes – two kilometres below the surface of the vast Antarctic ice sheet.

The newly discovered volcanoes range in height from 100 to 3,850 metres.

All of them are covered in thick layers of ice.