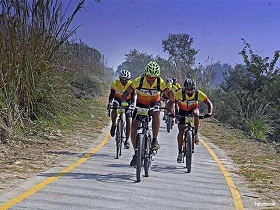 India’s one of the ancient practices called as “YOGA”, formally accepted by the UNESCO’s list of Intangible Cultural Heritage of humanity.

UNESCO listed the yoga, this is 13th intangible cultural heritage that has been listed from India.

The Chhau dance (Inscribed in 2010), the Buddhist chanting of Ladakh, Sankirtana the ritual singing, drumming, and dancing of Manipur, the traditional brass and copper craft of utensil making among the Thatheras of Jandiala Guru, Punjab and Ramlila- the traditional performance of the Ramayana these are the previous ones.

The list of intangible cultural treasures was created 10 years ago, mainly to increase awareness about them, while Unesco also sometimes offers financial or technical support to countries struggling to protect them.

Topic : History – Profile of State and its Latest diary of Events

A first cycle highway project, constructed by UP public works department while it has 207km long cycle highway runs between Etawah and Agra.

The cycle highway runs parallel to the main highway and is about 7-feet-wide. A divider in between ensures the safety of cyclists.

Israeli Scientists have created the first “water-wave laser” that emits a beam through the interaction of light and water waves.

How a typical laser is created?

A typical laser can be created when the electrons in atoms become “excited” by energy absorbed from an outside source, causing them to emit radiation in the form of laser light.

Significance of this discovery:

The study conducted by Technion Israel Institute of Technology is the first bridge between two areas of research that were previously considered unrelated to one another: nonlinear optics and water waves.

The water-wave laser offers scientists to studying the interaction of light and fluid at a scale smaller than the width of a human hair.

The laser could be used in tiny sensors that combine light waves, sound and water waves, to study cell biology and test new drug therapies.

A spacecraft to the moon in December 2017 send by an ISRO’s rocket, which is built by the TeamIndus, a Bengaluru based private aerospace company.

The mission’s aim is to land this spacecraft on the moon and will take high- definition video, images and data back to the earth.

All the technology is developed in house by TeamIndus except for the ISRO’s launch vehicle. ISRO’s workhorse Polar Satellite Launch Vehicle (PSLV) would launch the spacecraft in December 2017.

TeamIndus has high-profile investors, including Ratan Tata of the Tata Group and is a 100-member team of engineers, space enthusiasts, former Air Force pilots and former ISRO employees.

Subscribe our Newsletter to get Daily December TNPSC Current Affairs in English and Tamil on your Inbox.