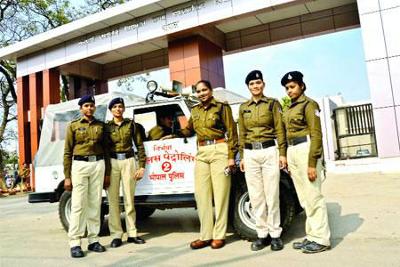 In Haryana, the Mahila Police Volunteer initiative was launched.

Haryana became the first state to adopt this scheme, by launching the initiative in Karnal and Mahendragarh districts.

Haryana has inducted the first batch of 1000 Mahila Police Volunteers. These volunteers have already been trained by the state State Police Authorities on their role and responsibility.

The Mahila Police Volunteers scheme is a link between the police authorities and the local communities in villages through police volunteers who will be women specially trained for this purpose.

To protect the women from any situation of harassement this scheme was started.

Topic : Political Sciece – India and its relations with other countries and pacts

India and Kyrgyzstan signed an Agreement

In order to strengthening cooperation in the field of Tourism, the Memorandum of Understanding between the Ministry of Tourism and Ministry of Cultural, Information & Tourism of the Government of the Kyrgyz Republic was signed.

Benefits of this MoU:

This would enable both parties to enter into a constructive dialogue for development and promotion of tourism in each other’s country for the economic development of two nations.

The Union Cabinet has approved the proposal of Ministry of Shipping, Major Port Authorities Bill, 2016 to replace the Major Port Trusts Act of 1963.

This will empower the Major Ports to perform with greater efficiency on account of full autonomy in decision making and by modernizing the Institutional structure of Major Ports.

The Union Cabinet has approved the Memorandum of Understanding (MoU) between Ministry of Rural Development (MoRD) and Food and Agriculture Organisation (FAO) to enhance the effectiveness of rural development programmes in India and to facilitate knowledge sharing.