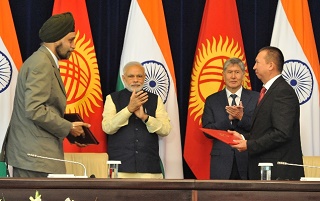 This Newspaper will carry important and useful news related to elderly persons besides inspirational stories.

Saanjhi Saanjh will serve as strong bridge between old and new generation.

Indian Institute of Skills (IIS) at Kanpur was started Prime Minister to making the India the Skill Capital of the world.

The Indian Institute of Skills is started under the Skill Development Ministry in partnership with the Institute of Technical Education, Singapore.

Agreement between India and Kyrgyzstan

India and Kyrgyzstan signed an agreement in the fields of Tourism, Agriculture and Food industry, Exchange of information of diplomatic training programmes, Broadcasting and exchange of audio visual programmes.

And they are also agreed to cooperate and encourage joint military exercises called as the “Khanjar”, an annual event.

On economic ties both sides agreed to encourage engagement in healthcare, tourism, IT, agriculture, mining and energy.

The government observed “Vasectomy Fortnight” between November 21 and December 4, in order to create awareness about male sterilisation and to facilitate district administrations reach sterilisation targets through campaigns.

The programme was concluded that men were unwilling to share the burden of birth control compared to women. This is because the fact that sterilisation is simpler in men than women, recovery time and surgical risk are smaller, complications are rare and deaths rarer.