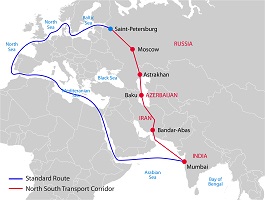 The International North South Transportation Corridor (INSTC) connecting Mumbai with St Petersburg and is set to be operationalized from the middle of next month with the first shipment from India to Russia.

India, Iran and Russia had in September 2000 signed the INSTC agreement to build a corridor to provide the shortest multi-model transportation route linking the Indian Ocean and the Persian Gulf to the Caspian Sea via Iran and St Petersburg.

From St Petersburg, North Europe is within easy reach via the Russian Federation.

The estimated capacity of the corridor is 20-30 million tonnes of goods per year.

The objective of the corridor is to increase trade connectivity between major cities such as Mumbai, Moscow, Tehran, Baku, Bandar Abbas, Astrakhan, Bandar Anzali and etc.

Sixteen-year-old Mohamad Al Jounde from Syria was awarded the International Children’s Peace Prize for his efforts to ensure the rights of Syrian refugee children.

Al Jounde, a refugee of the Syrian civil war, set up a school together with his family in a Lebanese refugee camp that currently provides 200 children with eduction.

The International Children’s Peace Prize is awarded annually to a child who has made a significant contribution to advocating children’s rights and improving the situation of vulnerable children such as orphans, child labourers and children with HIV/AIDS.

The first Children’s Peace Prize was launched in November 2005 during the World Summit of Nobel Peace Laureates in Rome.

It is the First Ever International Conference on AYUSH and Wellness. The conference is being held in Delhi.

More than 250 manufacturers of alternative medicine are showcasing their products and services at International Arogya 2017.

The World Soil Day is celebrated on 5 December globally.

It aims to communicate messages on the importance of soil quality for food security, healthy ecosystems and human well-being.

The Theme for Soil Day 2017 is ‘Caring for the Planet starts from the Ground’.

Venezuelan President Nicolas Maduro has announced the creation of a new virtual currency named ‘Petro’ in a bid to ease the country’s economic crisis.

The Petro would be backed by Venezuela’s oil, gas, gold and diamond wealth.

The 3rd edition of the Dialogue between the NITI Aayog and the Development Research Council of China, the DRC- NITI Aayog Dialogue was held in Beijing.

The DRC-NITI Dialogue provides an important platform for both sides to discuss key macro- economic issues impacting both countries and areas of mutual interest.

The 3rd Dialogue enabled an in-depth interaction between the two delegations on the world economic prospects, India-China economic cooperation and practices for sustainable growth.

The newly constituted 15th Finance Commission, held its first meeting in Delhi and touched upon preliminary discussions regarding its terms of reference.

The commission also agreed that it would expedite meetings with the government and the various stakeholders in order to meet those terms.

Bollywood superstar Amitabh Bachchan launched a book based on Indian cinema in Mumbai.

The book, titled ‘Bollywood: The Films! The Songs! The Stars!’, is a coffee table book, which provides historical insights, lesser-known facts and behind-the-scene exclusives of the most iconic movies made in the history of the Indian film industry.a