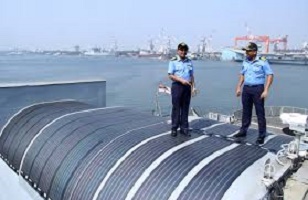 To Encourage, Promote and Provide national and international market to craftsmen from the Minority Communities all over the country, the second edition of Hunar Haath has begun in New Delhi.

India’s first ship to use solar energy on board

Kochi based survey ship INS Sarvekshak is installed with the solar panels on board by the Indian Navy.

With this, Sarvekshak has become the first ship in India, perhaps first in the world, to use solar energy on board.

The solar panels have the capacity to produce 5.4 KV of electricity, which is sufficient for internal lighting of the vessel round-the-clock.

Prithvi Defence Vehicle interceptor missile is capable of killing an incoming missile with a strike range of around 2,000 km outside the earth’s atmosphere.

India is the fifth nation in the world to have a robust Ballistic Missile Defence system. Other countries are US, Russia, Israel and China.