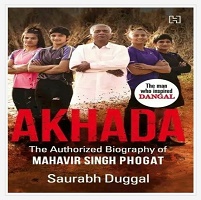 According to the report of the FlightStats regarding worst international airlines 2016, Air India ranked third-worst performing airline in the world.

The biography of Mahavir Singh Phogat, a former wrestler and a coach is written by sports journalist Sourabh Duggal.

This book tells the story of a Mahavir Phogat’s journey with his daughters and nieces hailing from a small village in Haryana to winning the medals for the country against all troubles.

Phogat was awarded the Dronacharya Award by the Government of India and he is the father and coach of the Geetha Phogat, Babitha Kumari, Rithu and Sangitha.

Geetha Phogat, who won India’s first gold medal in women’s wrestling in the 55kg freestyle category at the 2010 commonwealth games and she is the first Indian women wrestler to have qualified for the Olympics.

Babitha Kumari, who won a bronze medal at the 2012 World Wrestling Championships, and won gold medal in 2014 commonwealth games.

Indian biographical film Dangal is based on Phogat’s life.

The 12th World Hindi Day was celebrated on 10 January 2017 across the world to honour our Indo-Aryan language. According to the report, Hindi is the fourth most-spoken first language in the world.

Pakistan has successfully test-fired its first Submarine-Launched Cruise Missile capable of carrying a nuclear warhead up to 450km.

The missile, Babur-3, was fired from an underwater, mobile platform and hit its target with precise accuracy.

Subscribe our Newsletter to get Daily TNPSC Current Affairs Jan 10, 2017 in English and Tamil on your Inbox.