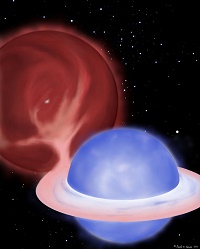 Why is it called a vampire star?

The vampire star, which is in blue in colour and smaller in size present in the binary system of stars.

This vampire star sucks the material from one of the bigger companion star to become blue straggler.

The small star becomes bigger, hotter and bluer, which gives it the appearance of being young, while the ageing companion burns out and collapses to a stellar remnant.

This scientific satellite mission endeavours for a more detailed understanding of our universe.

ASTROSAT is designed to observe the universe in the Visible, Ultraviolet, low and high energy X-ray regions of the electromagnetic spectrum simultaneously with the help of its five payloads.

The Karnataka state cabinet approved amending Prevention of Cruelty to Animals Bill, 1960 Act to legalize the Kambala and Bullock Cart Race which is a traditional festival held annually in Karnataka.

The amendment Bill will be introduced by the state cabinet in the legislature session scheduled to be begin from February 6,2017.

India is planning to launch one of its back up navigation satellites this year as a replacement to IRNSS-1A satellite, whose three atomic clocks have failed.

Each of seven satellites has three clocks. The clocks are important to provide precise data.

Starting in July 2013, the Indian space agency has launched all the seven navigation satellites.

Subscribe our Newsletter to get Daily Tnpsc current affairs jan in English and Tamil on your Inbox.