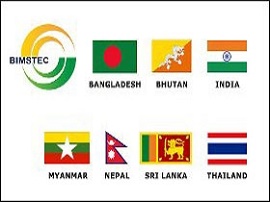 This hottest planet is warmer than most stars in the universe glowing gas tail like a comet.

What you need to know about the newly discovered planet?

The Jupiter-like planet, named KELT-9b, orbits a massive star KELT-9 every day and a half.

This gas giant 2.8 times more massive than Jupiter but only half as dense, because the extreme radiation from its host star has caused its atmosphere to puff up like a balloon.

Since it is tidally locked to its star — as the moon is to Earth — the day side of the planet is perpetually bombarded by stellar radiation.

Due to the hot planet, in that molecules such as water, carbon dioxide and methane cannot form there.

20th anniversary of the formation of BIMSTEC – June 6

BIMSTEC is celebrating 20th anniversary of its formation.

What you need to know about BIMSTEC?

This sub-regional organisation was started on June 6, in the year 1997 through a Bangkok Declaration.

The 15th Presidential Election of India going to be held on 17th July 2017.

The term of President Pranab Mukherjee who assumed the office in July 2012 will come to an end on 24th July 2017.

The nominations for Presidential Election will be from the 14th June 2017 till 28th June 2017.

The polling will be held in Lok Sabha, Rajya Sabha and premises of different state assemblies while secret ballot will conduct this polling.

Era Sezhiyan or Rajagopal Seziyan was an Indian writer and politician.

As parliament member, he highly reminded for his recommendation of the abolition of the Members of Parliament Local Area Development Scheme (MPLADS).

He was the younger brother of late Navalar V.R. Nedunchezhian and both of them were the founding members of the DMK.

He jointly edited the “Magazine Manram” with his brother.