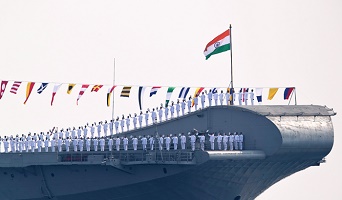 The world’s oldest aircraft carrier INS Viraat, will be decommissioned on 6 March 2017 with a ceremonial good buy in Mumbai.

A glorious chapter in the Indian Navy’s history will come to an end when INS Viraat, the longest serving aircraft carrier will retire after serving the country for nearly three decades.

INS Viraat was commissioned in Indian Navy in 1987, before that this historic ship served Royal British Navy for 27 long years.

After that it sold to the Indian navy. It was built in 1943, during the Second World War.

The 360 feet tallest national flag in the country was hoisted at the Attari-Wagah joint check post in Punjab.

Earlier, the record was held by the one in Ranchi which is 293 feet high.

The Andhra Pradesh Chief Minister N Chandrababu Naidu approved the proposals to rename the Vijayawada Airport and the Tirupati Airport.

Name of the Airports:

The Vijayawada Airport in Gannavaram renamed as “Nandamuri Taraka Rama Rao (NTR) Amaravati Airport” after the legendary actor and founder of the ruling Telugu Desam Party and the new capital of Andhra Pradesh.

The Tirupati Airport at Renigunta has been renamed as “Sri Venkateswara Airport” after Lord Venkateswara of the temple town.

He was chosen for the prestigious award for his Malayalam book “Hymavathabhoovil”, which tells about the ancient trails of Indian culture, myth, literature and people spreded in the plains, valleys and mountains of India.

He already won the Sahitya Akademi award for this same book.

Kumar is Chairman and Managing Director of the Malayalam daily Mathrubhumi and a Rajya Sabha MP.

He has served thrice as the chairman of the Press Trust of India (PTI) and is currently a director in the news agency.

The Moortidevi Award is an annual literary award in India presented by the Bharatiya Jnanpith organization for a work which emphasizes Indian philosophy and culture.