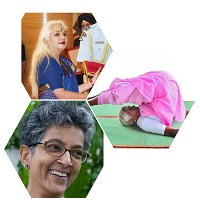 Nari Shakti Puraskars 2016 will be presented by the President on the International Women’s Day.

To acknowledge Women’s achievements, The Nari Shakti Awards were initiated in the year 1999. The awards recognize the efforts made by women & institutions in various services for the cause of women, especially vulnerable and marginalized women.

The Ministry of Women and Child Development announces these national level awards for eminent women, organisations and institutions. The Nari Shakti Puraskar carries a cash award of Rs.1 Lakh and a certificate for individuals and institutions.

There are three awardees from Tamil Nadu.

Nannamal – 97 yr old Yoga enthusiast, who has been practising yoga since she was 7 yrs old.

Dr. Nanditha Shah – She runs an organization called SHARAN – Sanctuary for Health And Reconnection to Animals and Nature. This is devoted to spreading awareness about health and an ecologically sustainable lifestyle.

Kalyani Pramod – She works for promote the art of textiles and handloom through Manasthala Foundation, that showcased the work of weavers.

Kohli becomes the first Indian cricketer to get Polly Umrigar award on the third occasion after 2011-12 and 2014-15 season.

The award is given to honor the best performance in the bilateral Test series between India and West Indies.

The Revised GFR -2017 aims to provide a framework within which an organization manages its business in a financially prudent manner without compromising its flexibility to deal with varied situations.

The new GFRs 2017 will enable an improved, efficient and effective framework of fiscal management while providing the necessary flexibility to facilitate timely delivery of services.

In this 14 days exercise, Nepal Army is being represented by the officers and troops of the elite DURGA BAKSH Battalion while the EKTA SHAKTI Battalion of The Punjab Regiment is participating on behalf of the Indian Army.

This is eleventh such battalion level exercise between the two countries aimed at training of troops in counter insurgency operations in mountainous terrain.

The ICAR has identified three varieties, namely PAU Bt 1, F1861 and RS 2013, for cultivation in Punjab, Haryana, Rajasthan. It is a cheaper alternative to Bt cotton hybrid seed.

3rd Festival of Innovation (FOIN) was started in President’s house, which is a unique initiative of the Office of the President of India to recognise, respect and reward grassroots innovations and foster a supportive ecosystem.

Hosted in the month of March at The President’s House, the FOIN has become a national celebration of creativity and innovation at and for grassroots.

The daylong conference was organized by Ministry of Water Resources, River Development and Ganga Rejuvenation as part of Jal Kranti Abhiyan.

Jal Kranti Abhiyan was launched on June 05, 2015 to consolidate water conservation and management in the country through a holistic and integrated approach involving all stakeholders making it a mass movement.