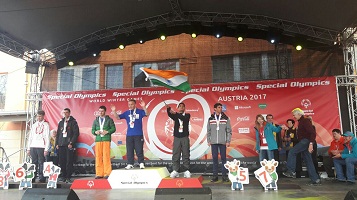 Austria, in 1993, became the first country outside the US to host the Special Olympics World Winter Games.

What is the Special Olympics?

The Special Olympics comprise a group of athletic competitions for children and adults with intellectual disabilities.

India finished its campaign at the Special Olympics World Winter Games in Austria with a total of 73 medals, which included 37 gold medals, 10 silvers and 26 bronze.

The Special Olympics are the brainchild of Eunice Kennedy Shriver, who is the sister of former US president John F Kennedy.

Shriver had organised informal sports events in her backyard in an effort to bring joy and a sense of belonging to those with intellectual disabilities for many years.

After that, she arranged the first Special Olympics World Games in 1968 in Chicago, where around 1,000 athletes from the US and Canada participated.

Topic : History – Appointments, Persons in News, Who is who?

Indian-American Vanita Gupta has been appointed as president and CEO of ‘The Leadership Conference on Civil and Human Rights’, becoming the first woman to head the prestigious organization.

She will replace Wade Henderson who is stepping down after more than two decades. She will begin her new role on June 1, 2017.

About The Leadership Conference on Civil and Human Rights:

Topic : History – Persons in News, Who is Who?

Geethalakshmi – Vice Chancellor of the Tamil Nadu Dr. MGR Medical University was given the award in the recognition of her outstanding services in the field of socio medical relief for 2016.

This is the second time Dr. Palanivelu has got the award — he got it the first time in 2006 in the speciality development category.

Anand K. Khakhar – Programme director, Centra for Liver Diseases and Transplantation at Apollo Hospitals, Chennai received the award for the recognition of best talents in encouraging the development of specialities in different branches in medicine category, also for 2015.

Subscribe our Newsletter to get Daily TNPSC current affairs MAR in English and Tamil on your Inbox.