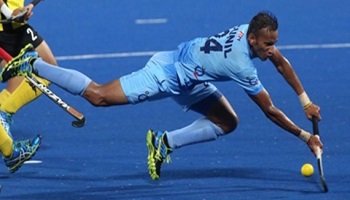 Kanha has become the first tiger reserve in India to officially introduce a mascot as Bhoorsingh the Barasingha.

In this reserve, the hard ground swamp deer present as the spirit of the reserve and spread awareness to save it from possible extinction.

Why it is chosen?

Barasingha, or swamp deer, is the state animal of Madhya Pradesh.

The Kanha tiger reserve, spread over Mandla and Balaghat districts, is the only place in the world where these species exists.

Topic : History – Appointments, Who is Who? And Person in News

Senior bureaucrat Vanaja N Sarna was appointed as chairperson of Central Board of Excise and Customs (CBEC).

Sarna, a 1980 batch officer of Indian Revenue Service (Customs and Central Excise), is at present member in the CBEC, an apex policy making body for indirect taxes.

She will take over charge from incumbent Najib Shah.

Anupam Kher will be honored with the Kala Ratan Award by Vice President Hamid Ansari.

He was honoured with the Padma Shri in 2004 and the Padma Bhushan in 2016 for his contribution in the field of cinema and arts.

The actor who has worked mainly in Hindi films has also appeared in acclaimed international films like Bend It Like Beckham, Bride and Prejudice.

The particles that cover the surface of Saturn’s largest moon, Titan, are “electrically charged”, show results of an experiment.

The findings, published in the journal Nature Geo science.

To test particle flow under Titan-like conditions, the researchers built a small experiment in a modified pressure vessel in their Georgia Tech lab.

Indian Hockey player SV Sunil was named by the Asian Hockey Federation (AHF) as Player of the Year for 2016.

And also Harmanpreet Singh chosen as the Promising Player of the Year in the continental body’s annual awards.

Subscribe our Newsletter to get Daily TNPSC current affairs MARCH in English and Tamil on your Inbox.