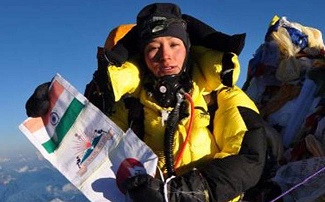 The Cabinet Committee on Economic Affairs has approved the setting up of Indian Agricultural Research Institute (lARI) in Assam.

lARI-Assam would be a Post-Graduate Institution of higher learning in Agricultural Education.

It will have the hallmark identity of an IARI including all sectors of agriculture like field crops, horticultural crops, agro-forestry, animal husbandry, fisheries, poultry, piggery, silk rearing, honey production, etc.

Anshu Jamsenpa is a mountaineer and mother of two children from Bomdila, Arunachal Pradesh.

She made a history by becoming the first Indian woman to conquer the 8,848 feet Mount Everest for a fourth time.

Indian scientist Shrinivas Kulkarni has won the Dan David prize for his contribution in the field of astronomy.

Mr Kulkarni is a professor of astrophysics and planetary science at California Institute of Technology in Pasadena, California.

The Dan David Prize grants annually three prizes of US$1 million each for outstanding achievement. Fields are chosen for Past, Present and Future.

The Dan David Prize is awarded for innovative and interdisciplinary research.

The “Future” category this year is dedicated to astronomy and will be shared by Shrinivas Kulkarni, Andrej Udalski of the University of Warsaw and Neil Gehrels of NASA for their discoveries on time-domain astrophysics.

The World Meteorological Organization (WMO) and the Helmholtz Center for Polar and Marine Research (AWI) on 15th May 2017 officially announced the start of the Year of Polar Prediction (YOPP).

YOPP is one of the key elements of the Polar Prediction Project.

The YOPP’s aims to enable a significant improvement in environmental prediction capabilities for the polar regions Arctic and Antartic.

Bilateral Naval Exercise between Navies of the Republic of Singapore and India is called as “SIMBEX-17” commenced.

SIMBEX is an acronym for “Singapore-India Maritime Bilateral Exercises”.

Bilateral cooperation between Singapore and India was first formalised when RSN ships began training with the Indian Navy in 1994.

This year’s edition of SIMBEX-17 being held in the South China Sea would be the 24th in the series and is aimed to increase interoperability between the RSN and IN as well as develop common understanding and procedures for maritime security operations.