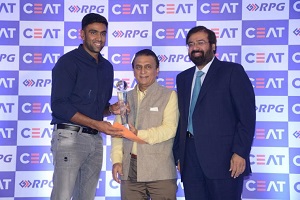 International Cricketer of the Year

Indian off-spinner Ravichandran Ashwin has won the International Cricketer of the Year award at the CEAT Cricket Rating International awards 2017.

Ashwin played an important role during the home season, where India won 10 of their 13 Tests played against New zealand, England, Bangladesh and Australia.

Ashwin has taken 99 wickets in the past 12 months.

CEAT Cricket Ratings (CCR) was formed in 1995 in association with professional Management Group.

Three cricketing legends Clive Lloyd, Ian Chappell and Sunil Gavaskar are the members of the Governing Council of the CRR.

This rating system takes into account the performances in Test Cricket and One Day Internationals over a period of 12 months from 1 May to 30 April.

It is the first International Cricket Rating System to reward and recognize the performances on annual basis.

This robot is known as robocop. It is around 5-foot tall and weighs a 100kg.

It can not only identify hand gestures from a distance of up to 1.5 m, but can also detect people’s emotions and facial expressions.

The robot will patrol shopping malls and other tourist attractions.

President Pranab Mukherjee has given his assent to the long-pending Prohibition of Child Marriage (Karnataka amendment) Bill, 2016, giving greater powers to the police and increasing the penalty for child marriage.

What you need to know about the bill?

The amended Bill seeks to ensure zero tolerance towards child marriage, granting powers to policemen and enhancing penalties for those attending wedding ceremonies of minors.

While the original legislation does not prescribe a minimum punishment for offenders, the amendment proposes rigorous imprisonment of one year.

It also enables any police officer to take awareness of the criminal offence.

Karnataka is among the States that record a high number of child marriages in the country (about 23% of the total, according to a recent survey).

The Bill was amended last year by the State Assembly and sent to the Centre.

A young Indian IAS officer, Haulianlal Guite, from Manipur state has recently published a book titled “Confessions of a dying mind: the blind faith of atheism” in New Delhi.

The book was released by Union Minister Kiren Rijiju.

The book explores the nature of science, religion, evidence and even love in light of leading developments.

It makes use of the latest findings of modern science and the most solid theories in philosophy.

The Indian Space Research Organisation (ISRO) and the National Aeronautics and Space Administration (NASA) have collaborated to build a satellite called NISAR.

The satellite will help scientists to monitor the Earth like never before.

The expanded form of NISAR is NASA-ISRO Synthetic Aperture Radar,scheduled to be launched in 2021.

The estimated cost of the radar is more than 1.5 billion dollars and it could possibly be the world’s most expensive Earth imaging satellite.

The satellite design will make use of a large deployable mesh antenna and will operate on dual L band and S band.

Satellite will be 3-axis stabilized and is planned to be launched into a Sun-synchronous dawn to dusk orbit with a mission life of 3 years.

AlphaGo is a narrow Artificial intelligence, computer program developed by Alphabet Inc.’s Google DeepMind in London to play the board game Go.

In October 2015, it became the first Computer Go program to beat a human professional Go player without handicaps on a full-sized 19×19 board.

AlphaGo’s algorithm uses a Monte Carlo tree search to find its moves based on previous knowledge.

It was previously “learned” by machine learning, specifically by an artificial neural network (a deep learning method) by extensive training, both from human and computer play.

In computer science, Monte Carlo tree search (MCTS) is a trial-and-error search algorithm for some kinds of decision processes, most notably those used in game play.

The focus of Monte Carlo tree search is on the analysis of the most promising moves, expanding the search tree based on random sampling of the search space.