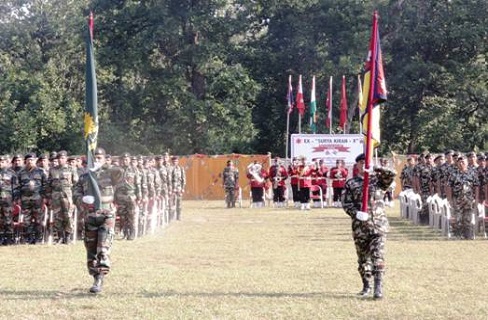 Topic : History – India and its neighbours

The aim of this exercise is to conduct battalion level joint training with emphasis on Counter Terrorism in mountainous terrain.

Aspects of Disaster Management have also been included in the exercise.

The Joint Battalion Level Exercise will enhance defence co-operation and relations between the two nations.

The Exercise will be yet another step towards taking traditional friendship between the two nations to greater heights.

World Vegan Day is celebrated every year all around the world on 1st November to raises awareness about animal rights and advocates the widespread adoption of a vegan lifestyle.

Under the Ministry of Commerce and Industry, The Department of Industrial Policy and Promotion (DIPP), in partnership with the World Bank Group, has released results of the Assessment of State Implementation of Business Reforms 2015-16.

In August parliament passed The Benami Transactions (Prohibition) Amendment Act, 2016, designed to curb black money came into effect from November 1.
An amendment of the 1988 Benami Transactions Act, the new law provides for up to seven years’ imprisonment and fine for those indulging in such transactions.

The earlier law provided for up to three years of imprisonment or fine or both.