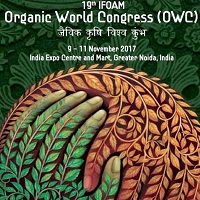 The Organic World Congress (OWC) is organized once every three years in a different country.

About the Island Development Agency (IDA):

The IDA was set up on June 1 this year following Prime Minister Narendra Modi’s review meeting for the development of islands.

The meetings of the agency are chaired by the Union Home Minister.