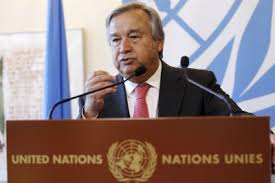 The Center has come out with the draft for National framework bill, 2016.

Once the bill which gets its required nod in Union cabinet, then it will be introduce in the Parliament.

Aim of the Bill:

It will work as a model bill for the state, to framework its local laws to use conserve water.

Indian Institute of Science Education and Research (IISER) in Kolkata have used human hair to produce cost effective, metal free cathodes which is to be used in solar cells.

It is the first bio waste derived electrode which used in solar cell devices.

It is cost effective than commonly used platinum metal cathode, so as to reduce the cost of solar cells.

Portugal’s former Prime Minister Antonio Guterres was appointed as the next Secretary-General of the United Nations by the General Assembly.

Antonio Guterres was Prime Minister of Portugal from 1995 to 2002.