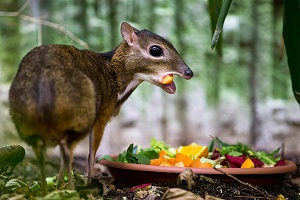 The Global Human Capital Index for the year 2017 has been released by World Economic Forum (WEF).

It is based on how well they are developing their human capital on a scale from 0 (worst) to 100 (best) across four thematic dimensions and five distinct age groups to capture the full human capital potential profile of a country.

India has been placed at a low 103 rank, the lowest among BRICS economies.

Among the South Asian countries also, India was ranked lower than Sri Lanka and Nepal, although higher than neighbouring Bangladesh and Pakistan.

Performance of other countries:

The overall list was topped by Norway, followed by Finland and Switzerland in the second and third place respectively.

Mouse deer released in Amrabad Reserve for the first time

The Telangana State Forest Department has re-introduced the endangered ‘mouse deer’ into the forests of Nallamalla in Amrabad Tiger Reserve.

The release of these mouse deer into the protected enclosure of 2.4 hectares is aimed at improving the biodiversity.

The Amrabad Tiger Reserve was chosen because these animals were earlier wandering in this area.

These Mouse deer is also called as ‘spotted Chevrotain’, it is one of the endangered species usually found in deciduous and evergreen forests of the country.

It has its own family called Tragulidae.

Goa would host the 36th National Games, in Goa.

The Indian Olympic Association (IOA) has given the official rights to Goa to host the 36th National Games.