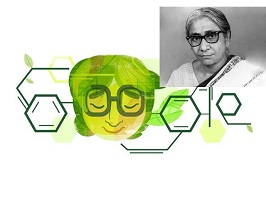 A multi-agency exercise was conducted on the banks of Hussain Sagar Lake as the final event of ‘Pralay Sahayam’ in Hyderabad.

The event demonstrated efforts of all central and state agencies, National Disaster Relief Force (NDRF) and the Armed Forces towards jointly tackling an urban flooding scenario in Hyderabad.

SSP is a Pune-based non-governmental organisation working among women farmers.

The award recognises SSP’s initiative to empower over 20,000 women farmers from the impoverished Marathwada region in Maharashtra

On the latest Badminton World Federation rankings, PV Sindhu has ranked to number 2 from number 5.

It is her career’s best ranking with 75664 points.

In the men’s ranking India’s Ajay Jayaram has secured the 20th rank.

Google Doodle, today, celebrates 100th birthday of Asima Chatterjee, a renowned Indian chemist, who was the first female Doctorate of Science in India from an Indian University.

She also authored a considerable volume of work on medicinal plants of the Indian subcontinent.

She was the first woman to receive a Doctorate of Science from an Indian University.

Awards for scientists on September 25

The Tamil Nadu State Council for Science and Technology is presenting the State scientists award for the years 2012, 2013 and 2014 on September 25 at Anna University.

Minister for Higher Education K.P. Anbalagan will be presenting the awards.

The awards will be conferred on scientists from 10 disciplines, including agricultural sciences and medical sciences.