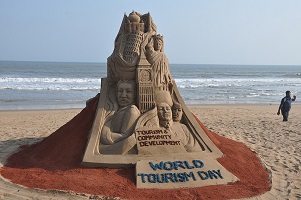 India has been ranked as the 40th most competitive economy on the World Economic Forum’s global competitiveness index.

The Global Competitiveness Index (GCI) is prepared on the basis of country-level data covering 12 categories or pillars of competitiveness.

India stabilises this year after its big leap forward of the previous two years.

The score has improved across most pillars of competitiveness. These include infrastructure (66th rank), higher education and training (75) and technological readiness (107), reflecting recent public investments in these areas.

The list is topped by Switzerland. The US and Singapore are in the second and third places, respectively.

The World Tourism Day is celebrated across the world on 27th September to create awareness among the international community of the importance of tourism and its social, cultural, political and economic value.

The theme for World Tourism Day 2017 is ‘Sustainable Tourism – a Tool for Development’.

Bilal Dar, a young boy from Srinagar has become the brand ambassador for Srinagar Municipal Corporation.

Bilal Dar has been contributing to the ‘Swachhta Abhiyan’ since the age of 12.

Joao Lourenco choosed as the Angola’s President, making him the first new President of the country in 38 years.

This comes after the previous president, Jose Eduardo dos Santos, announced his retirement and chose Lourenco as his successor.