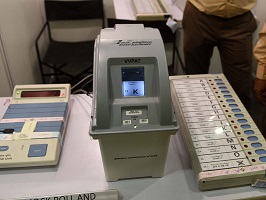 VVPAT to be used in Gujarat polls

The Election Commission of India will use Voter Verifiable Paper Audit Trail (VVPAT) gadgets with Electronic Voting Machines (EVM) in all 50,128 voting booths in Gujarat, which goes to the Assembly polls at the end of this year.

This is the first time an entire assembly poll will be conducted using EVMs equipped with VVPAT.

Small slips of paper records the details of the vote. The Election Commission (EC) first introduced VVPAT in the 2014 Lok Sabha elections.

How is it related to EVMs?

When a vote is cast on the electronic voting machine, a small paper slip bearing the name and symbol of the candidate is generated.

This paper appears for about 10 seconds. The slip will then automatically fall in a sealed safe box, attached to the EVM, thus maintaining a physical paper trail of all the votes cast.

The World Maritime Day was formally celebrated by the International Maritime Organisation (IMO) on 28 September 2017.

Theme: “Connecting Ships, Ports and People” is the theme of World Maritime Day this year.

This theme was chosen by the IMO to provide an opportunity to focus on the many diverse sectors and people involved in the shipping and logistics areas.

The theme of this year’s Formation Day is “School Safety”.

NDMA, as the apex body, is mandated to lay down the policies, plans and guidelines for Disaster Management to ensure timely and effective response to disasters.