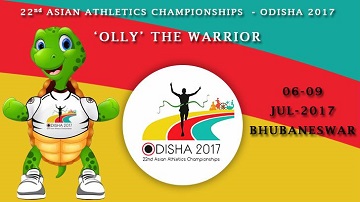 It was held from 6 to 9 July 2017 at the Kalinga Stadium in Bhubaneswar, India.

Bhubaneswar was the third Indian city to host Asian Championships.

Around 560 athletes from 41 countries attended the event.

India has topped the medal tally for the first time in the history of Asian Athletics Championships.

China got second place with 21 medals and Kazakhastan got third place with the medals of 8.

Know about logo and mascot:

World Population day is an annual event, observed on July 11 every year, which seeks to raise awareness of global population issues.

The event was established by the Governing Council of the United Nations Development Programme in 1989.

It was inspired by the public interest in Five Billion Day on July 11, 1987-approximately the date on which the world’s population reached five billion people.

MoHUA is the new name for urban development & housing ministry

The government has merged the urban development and housing and urban poverty alleviation ministries.

Now this will be known as Ministry of Housing and Urban Affairs (MoHUA).

This is third time the ministries have been merged.

Subsequently, after the creation of Department of Urban Employment and Poverty Alleviation as a separate one in 1995, the ministry came to be known as the Ministry of Urban Affairs and Employment.

Abhijeet Gupta is an Indian chess player with the title of Grandmaster (GM).

Gupta is the first player to won the title of Commonwealth Chess Champion four times.